Water Fantaseas devotes the same degree of care and consideration to large-group cruises with custom dinner cruise. The result is a Custom Dinner in Cruise that is uniquely yours.

Our personalized Miami yacht party services will warrant a memorable experience for all of your guests.

Our strict attention to detail in every phase of the planning and execution assures you that each aspect of your cruise will be thoughtfully considered in terms of meeting the specific needs of your corporate party.

Our passion for our work, and our love for yachts has made us one of the most reputable chartering company in the South Florida region. Our services cater to small intimate groups, and both medium and large corporate groups. 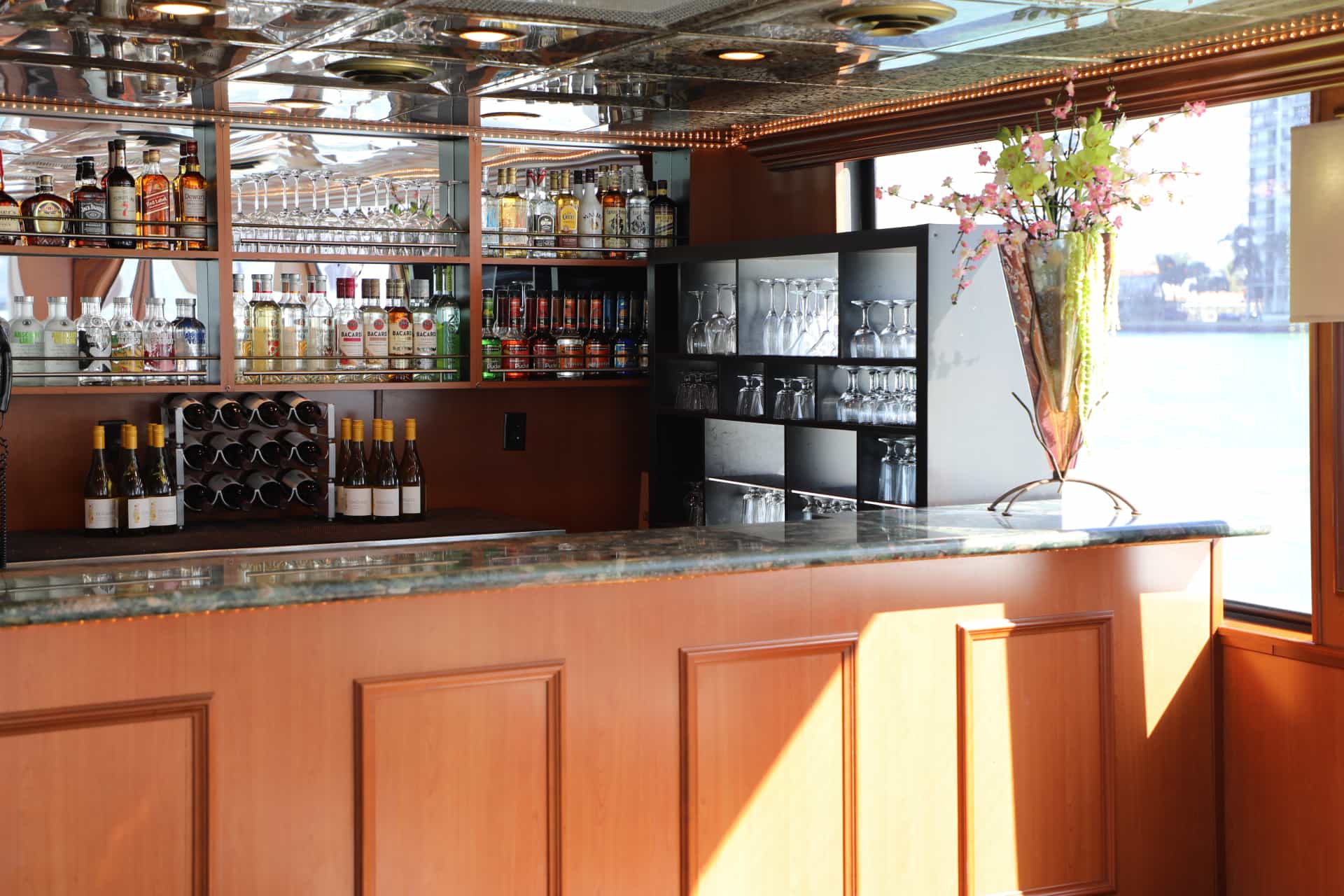 Your cruise dinner will begin at a conveniently located marina close to Downtown Miami.

At the appointed hour (but not until all your guests are aboard, of course), we haul in the gangplank, cast off the mooring lines and get underway. While each itinerary will be individually designed to meet the specific needs and desires of that particular charterer, the landscape dictates some common routes.

Typically, we’ll first cruise by Downtown Miami’s striking waterfront: near the west end of the cruise port and Government Cut, a bit off American Airlines Arena, in front of Bayside Marketplace and Bayfront Park, across the mouth of the Miami River and down past Brickell Key. We continue south, though at the necessary distance offshore, nearly parallel to Brickell Avenue, which is the very heart of the “Financial District of the Americas” and the site or some spectacular new high-rise construction, both residential and commercial.

We’ll probably turn around when we reach the Rickenbacker Causeway, the only highway connection to Virginia Key and Key Biscayne, though we might pass through the bridge for a moment to have a brief glimpse of the wide-open lower bay. But whether it’s just before or just after going through this high fixed bridge, we’ll definitely turn around to head back north. While this might seem to involve some backtracking, the truth is there are so many things to view along this route that you’ll actually just get a second chance to see what you may have missed on the way down. Besides, the ever-changing sub-tropic light constantly transforms the appearance of the sights ashore, painting a slightly different image with every passing moment. So even if you saw something clearly on the way south, you’ll be seeing it “again for the first time” on the way back north.

When we return to the mouth of the Miami River, we swing to our right to head out the busy “Fisherman’s Channel,” as the port of Miami’s south channel is known. On our left we see the port’s primarily cargo side, with its long row of efficient high-capacity cranes that can off-load and reload a huge container ship and then have it ready to go back to sea again in less than 24 hours. When we near the end of the port facilities we come upon Fisher Island on our right. This community, said to be the highest-valued real estate in all the United States, is the only inhabited island in Biscayne Bay that isn’t connected by causeway. As we turn to the left to go up the channel on the inside of South Beach, we cross the main ship channel and most probably will see a Fisher Island ferry or two as they cross back and forth between mainland and island every few minutes 24/7. Other than by private yacht or helicopter, these ferries are the only way on and off the island.

As we head north we’ll pass under the east bridge of the Macarthur Causeway, one of the prime routes between Miami and South Beach. We’re proud to note that this next part of your trip is something you’ll probably only find with Water Fantaseas because the boats we use for Corporate Cruises are among the few dinner cruise vessels that can clear this bridge and have shallow enough draft to be able to closely approach Star, Palm and Hibiscus Islands where we can view the many “homes of the rich and famous” (or just plain rich!). 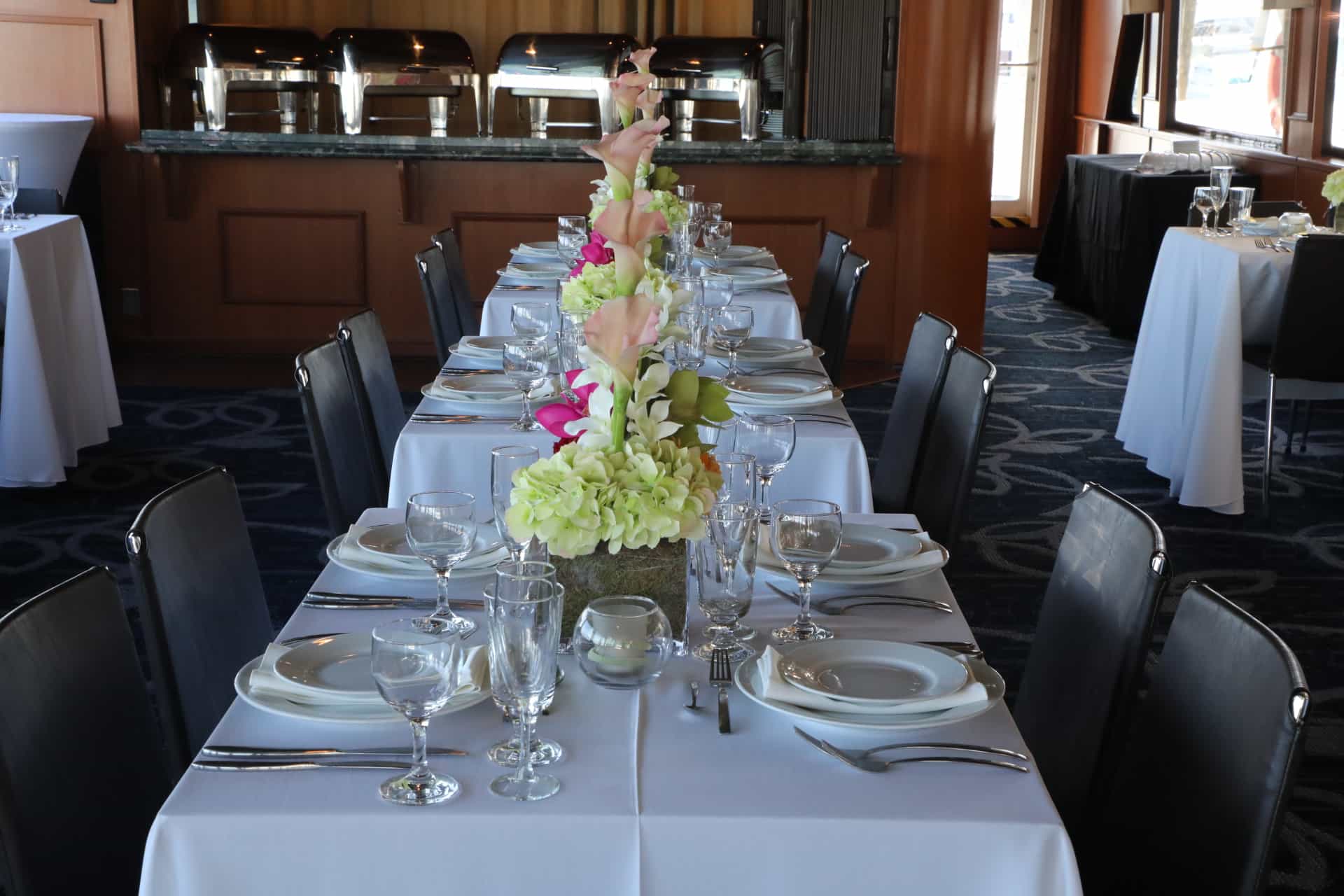 The cruise begins at a Fort Lauderdale marina, at the appointed time of your choice. Once all of your guests are boarded, we cast off and the beautiful surroundings will dictate our routes.

One of the more popular routes is to head southward to pass through F. Lauderdale’s very busy Port Everglades. Usually you will see a number of ships in port, and of varying types. There will almost always be tankers because Port Everglades is an active oil port: most of the gasoline, diesel fuel, jet fuel and such, that comes into Florida enters here to be transported elsewhere by highway tanker or pipeline. It is also a freight port, and most often there will be one or more large container ships being unloaded by the huge shore side cranes. And depending on the day and time, you just may see some elegant cruise ships, too.

If your chosen itinerary includes northern routes, the Port will be a turnaround point. But many opt to continue south along the Atlantic Intracoastal Waterway to cruise through the “condo canyons” of Hollywood, Hallandale Beach, Aventura and Sunny Isles. In addition to the many high-rise condos and hotels (including many new ones under construction), there are some interesting private homes along this route also – some of them quite new, large and most impressive. And don’t worry about seeing everything at once, because ultimately the boat will have to turn around and come back northward, giving you the opportunity to catch what you may have missed on the way south.

If you decide to head back north from Port Everglades, you still have a choice. You can continue northward up the Intracoastal, or you can turn left at the mouth of the New River for a trip upstream. This will take you past many private homes and estates. Some of which are still the small “winter cottages” that have lined the river since the area was first developed. Believe it or not, in those days the developers would GIVE you the land if you would contract to have them build you a house! You’ll also see many newer and larger homes that have been built on what once were multiple lots, covered by two or three of those original houses.

You’ll also get to see a huge portion of Downtown Fort Lauderdale close up, because much of the core city was built along the river. You’ll also be able to view a bit of history, including Broward County’s oldest and second oldest surviving structures, though they are now dwarfed by new high-rise condos. You’ll also see some of the city’s active nightlife in Las Olas Riverfront complex and the Performing Arts Center, as well as further proof that Fort Lauderdale is, indeed, “The Venice of America” in that there’s everything from churches to prisons lining the river’s shores. If you opt to run up the Intracoastal instead of the river, you’ll be able to view a scene similar to the southern route, except with more private homes and fewer high-rises – though you’ll also see ample evidence that this, too, could be changing. And of course, because this place is also known as the “The Yachting Capital of the World,” along any route you’ll also encounter all sorts of pleasure boats from outboard-powered center console fishing boats to magnificent megayachts.

Now, any of these elements would make for a wonderful cruise. But there’s more. It starts with elegant hors d`oeuvres and cocktails from the open bar as you and your guests unwind. And then, when everyone is nicely relaxed, comes dinner. Your menu choices are outstanding and varied. You can opt forasumptuous buffet or a sit-down dinner with a wide range of possible entrees. Coffee or tea, dessert, bread and/or rolls are included, of course. And while the food and service are as fine as you’d find in many a shore side restaurant, the bonus of enjoying the meal while on a delightful cruise makes it even more memorable.

Now, all this would make for a wonderful cruise in itself. But there’s more. It starts with elegant hors d`oeuvres and cocktails from the open bar as you and your guests unwind. And then, when everyone is nicely relaxed, comes dinner. Your menu choices are outstanding and varied. You can opt for a sumptuous buffet or a sit-down dinner with a wide range of possible entrees. Coffee or tea, dessert, bread and/or rolls are included, of course. And while the food and service are as fine as you’d find in many a shore side restaurant, the bonus of enjoying the meal while on a delightful cruise makes it even more memorable.

All too soon we find ourselves back at the departure point where you and your guests disembark; happy, satiated, and filled with good feelings.

While the details of the above cruise are typical, and this or something quite like it will suit most Corporate Cruise requirements, we pride ourselves on working hard to meet every client’s exact, individual and specific needs. So we’ll be happy to work with you to develop something especially for you in terms of itinerary, menu and entertainment. Just call, and one of our cruise consultants will discuss your particular needs and desires. And then we’ll be happy to structure a cruise that will meet them.